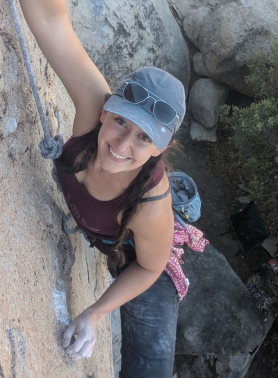 Sarah Hughes, the OCWC’s Assistant Director since 2013, will be conducting the chorus for Jocelyn Hagen’s “All the Pretty Little Horses” at the American Choral Directors’ Association (ACDA) Western Region conference in Salt Lake City on March 7, 2020!  The OCWC has been invited to perform at this conference for a third time and it is an incredible honor to be selected this season as one of only 18 choirs to perform at the conference.

Sarah is a 2011 graduate of the Conservatory of Music at Chapman University in Orange, CA. She holds a Bachelor of Music degree in music education with an emphasis in voice and completed her Master of Arts degree in teaching at Chapman’s College of Educational Studies in 2016. Sarah served as our conducting intern from 2011 – 2013, and gained rare and valuable experience for a young, female conductor, working directly with the OCWC under the tutelage of our Artistic Director, Eliza Rubenstein.

Sarah has a long history of singing with choirs. Some of her most memorable performances include singing the soprano solos for the Mozart Requiem and Haydn’s Little Organ Mass with the Mesa Verde United Methodist Church Choir; conducting and performing with the OCWC in Chepstow Castle on their UK tour; singing Haydn’s Lord Nelson Mass with the Idyllwild Festival choir; performing at the 2012 ACDA Western Division Conference with the OCWC; and singing the soprano solos for Debussy’s Salut Printemps with the Chapman Chamber Orchestra and University Singers.

Sarah’s passion for music has led her to pursue a career in teaching and conducting. She has directed high school summer choral camps, teaching styles ranging from Baroque classics to show choir pop arrangements. In addition to working with high school students, Sarah has specialized in church music for both youth and adult choirs. She currently teaches music to students in K-5th grade in Fountain Valley School District, directs the choir of Mesa Verde United Methodist Church in Costa Mesa, and maintains a private voice studio. If she’s not swing dancing or scaling rocks and walls, you’ll find her curled up with a cup of coffee and a pair of knitting needles.

Make a donation in honor of Sarah