The Orange County Women’s Chorus creates and performs outstanding choral literature. We are committed to adding new works to the treble repertoire through commissioning. 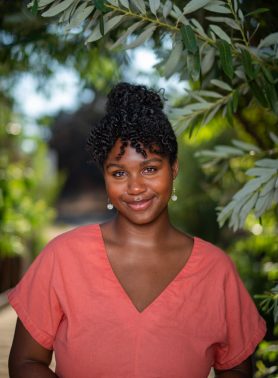 Commission: Hope is a Strange Invention

Text: “Hope is a Strange Invention” by Emily Dickinson

Jocelyn C Chambers is a Composer-creative based in Los Angeles. An Austin, Texas native, Chambers’ love-affair with film began during childhood. She often found herself crying at the movies as early as 8 years old. When she realized it was film music that struck a chord with her, she instantly chose to pursue it as her career. A classically trained composer and pianist, Chambers’ resonant work spans multiple genres. Her emotive neoclassical work is found in the award-winning feature documentary Mama Gloria. Her bubbly jazz is found in James Beard award-winning chef Mashama Bailey’s Masterclass course. Most recently, her joyful Southern blues is found in James Beard award-winning chef and author Michael Twitty’s Masterclass course. In addition to her independent work, Chambers is a staff composer for critically-acclaimed ad music house Butter Music and Sound. Her commercial work ranges from 1980s 8-bit and fantasy orchestral music to peppy voiceover work and has been featured in high-profile ads for Cotton and Liberty Mutual.

When not composing for the silver screen, Chambers has written classical commissions for Arizona State University and Houston Grand Opera. When not composing, Chambers is running her home bakery Sweets by Jocelyn, where she specializes in gourmet pies. Yes, she bakes for all her clients.

What We Hand Over - Dale Trumbore 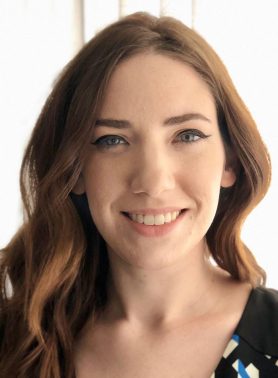 Commission: What We Hand Over

Text: “What We Hand Over” by Maya Jackson

In 2010, the OCWC became the first organization to commission a work (“Tribute”) from a young composer named Dale Trumbore. In the years since, Dale has become one of the most celebrated and respected choral composers in the nation, and we’re thrilled to have the opportunity to commission her again.

This work was conceived specifically for the virtual-choir medium, and it’s ingeniously designed to offer different levels of participation for singers in different circumstances, from a simple spoken-word part to a complex solo quartet.

Maya Jackson’s text was written in the midst of the past summer’s unrest, as the nation reckoned, more visibly than usual, with its past and present legacies of racism and police brutality. The poet’s reflection on the heirlooms of security and pain that Black women give and receive is both tender and wrenching. We are honored to present the world premiere of this work. 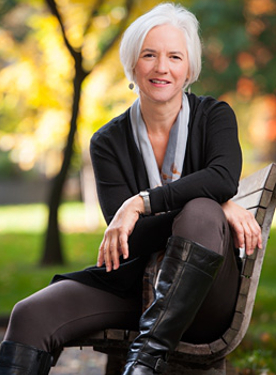 Joan Szymko is a composer and conductor from the Pacific Northwest. With a catalog of over 100 published choral works, her music is performed by ensembles across North America and abroad. The OCWC has performed her works in the past, including Ave Maria in December 2015. Joan, like the OCWC, is committed to bringing the choral art to her community. She says, “I find great solace in weekly choral rehearsals. There, people from all walks of life come together to surrender themselves to the whole, they come for communion, hoping to perfect a unified sound and for the promise of a deeply exhilarating musical experience. It can be transformative. It is healing.”

Words are very important to us, and Joan shares that passion for language. She says, “I employ words that delight, confront, or inspire me; make me think, make me feel.” When asked to comment on her experience of composing this work, Joan wrote, “Eliza and I agreed on the text of this commissioned work in the spring of 2016, well in advance of the conclusion to the political season. As I finished composing Water Women in November in the weeks immediately following the presidential election, giving breath and life to Alla Bozarth’s words became a cathartic experience. The poet upends the notion that women with a ‘place at the table’ best step carefully in order to protect their position: ‘We do not want to rock the boat,’ she says, ‘mistaking our new poise for something safe.’ We are not safe. We are on stormy seas the likes of which the human race has never seen. As an artist, and as a woman, I am of the belief that any hope for a sustainable future on this planet is dependent not only on women having a real place ‘on board,’ but on women taking over the helm.

“Water Women‘s opening theme suggests a ‘rocking’ feeling – not in a soothing way, as in rocking the cradle, but angular,and unsettled. Throughout, piano accompaniment supplies a watery undercurrent supporting women’s voices that alternate between powerful unison, harmonized rhythmic unison and coordinated polyphony. The watery journey culminates in a somewhat altered version of the opening theme and a final unison statement of women’s ‘supernatural’ powers.”

We Can Sing That! - Kirke Mechem 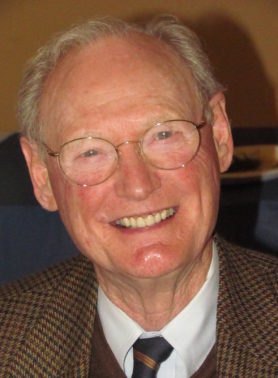 Commission: We Can Sing That!

Text: “We Can Sing That!” by Kirke Mechem

Kirke Mechem is a prolific composer with a catalogue of over 250 works. He enjoys an international presence, as ASCAP recently registered concert performances of his music in 42 countries. Born and raised in Kansas and educated at Stanford and Harvard Universities, Mechem conducted and taught at Stanford, and served as composer-in-residence for several years at the University of San Francisco. Mechem also lived in Europe, spending three years in Vienna, where he came to the attention of Josef Krips, who later championed the composer’s symphonies as conductor of the San Francisco Symphony. He was guest of honor at the 1990 Tchaikovsky Competition in Moscow and was invited back for an all-Mechem symphonic concert by the USSR Radio-Television Orchestra in 1991.

He has been honored and recognized for his contributions by the United Nations, the National Endowment for the Arts, the National Gal-lery; the American Choral Directors’ Association, and the Music Educators’ National Conference, and was presented with a lifetime achievement award from the National Opera Association. In 2012 the University of Kansas awarded him the honorary degree of Doctor of Arts.

Mechem’s compositions cover almost every genre, but vocal music is the core of his work. His three-act opera, Tartuffe, has been performed nearly 400 times in six countries. His extensive choral works have garnered him the title of “dean of American choral composers.”

The premiere of Mechem’s large-scale dramatic opera based on American abolitionist John Brown was commissioned to celebrate Lyric Opera Kansas City’s 50th anniversary. Songs of the Slave — a suite for bass-baritone, soprano, chorus and orchestra from the opera John Brown — has been performed over 80 times. His comic opera, The Rivals (an American update of Sheridan’s classic play by the same title), was premiered in 2011 by Sky-light Opera in Milwaukee. Mechem recently completed an opera based on Jane Austen’s Pride and Prejudice.

The Orange County Women’s Chorus has performed multiple works by Kirke Mechem, including his song cycle The Winged Joy and his choral-orchestral suite Songs of the Slave. Singers from the OCWC made their Carnegie Hall debut in June 2017 under the baton of Eliza Rubenstein conducting Songs of the Slave. 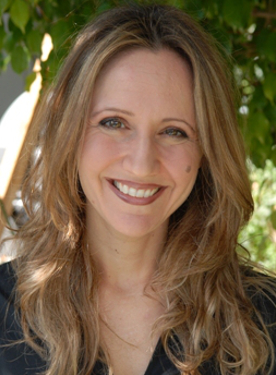 Award winning composer Sharon Farber, originally from Israel, has received critical acclaim as a composer in the concert world as well as that of film and TV. She brings to her music influences from her Middle Eastern heritage as well as her extensive knowledge of Classical and Western music.

Sharon began her musical career at the age of seven, as a classical pianist. After graduating from Thelma-Yelin High School for the Arts, she served in the IDF (Israeli Defense Force) and later worked as a theater composer and musical director in Israel. She won the first prize in Colors in Dance in 1992 for her music for choreography. In 1994, she moved to Boston upon receiving a scholarship from Berklee College of Music. During her studies, she won first prize in the yearly Professional Writing Division Concert with her first string quartet. After graduating Summa Cum Laude in 1997 (majoring in both Classical Composition and Film Scoring) she moved to Los Angeles to begin her professional career. Ms. Farber was the recipient of the prestigious Academy of Television Arts and Sciences Internship in Film Scoring, as well as the Mentorship program of the Society of Composers and Lyricists, on which she currently serves as a board member.

Ms. Farber has been writing concert and choir music in parallel to her film-scoring career, and has many national and international premieres and performances to her credit. To name a few: The Third Mother/Mothers’ Lament, in memory of slain reporter Daniel Pearl, was world premiered by the distinguished Los Angeles Master Chorale under the direction of Maestro Grant Gershon, and it won her the first prize in the Cincinnati Camerata Composition Competition (published by Roger Dean). ASHKINA, for mixed choir, chamber ensemble, and ethnic instruments, Translucent Rocks, premiered by the Israeli Chamber Orchestra, My Beloved for women’s choir and chamber ensemble, premiered by The Ithaca College Women’s choir, To Always Remember for soprano and chamber ensemble, and many more. Commissions include the Laguna Beach Music Festival, Pacific Serenade Ensemble, Culver City Symphony Orchestra, The Jewish Symphony Orchestra, The International String Quartet of the Yucatan Peninsula, and iPalpiti Artists International. Her latest acclaimed work, a commission by the Glendale Philharmonic Orchestra, Bestemming-Concerto for Cello, Orchestra, and Narrator, is being scheduled for performances internationally.

In the film and TV industry, Sharon has been working with such prestigious companies as NBC, CBS, Showtime, and the WB as well as scoring feature films. She worked with famed composer Shirley Walker on the WB TV series, “Batman and Superman,” and won a Telly Award for best score for the docudrama series California 2000. Her orchestral score for the film When Nietzsche Wept was released commercially. Sharon scored the powerful documentary Honor Diaries, as well as the features The Dove Flyer and Children of the Fall. She is currently working on a slate of films for the Aegis film group, among other projects. 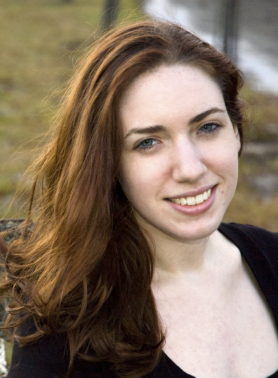 Dale Trumbore (b. 1987) has been called “a rising star among modern choral composers” (AXS), and her music has been praised for its “soaring melodies and beguiling harmonies” (The New York Times).

Trumbore is a native of Chatham, New Jersey; she decided to stay in Los Angeles after completing her master’s degree in Music Composition from the University of Southern California, where she studied with Donald Crockett and Morten Lauridsen. She graduated from the University of Maryland with degrees in Music Composition and English Language and Literature.

Oh Stars, from the Abyss: a Letter from Qiu Jin - Angel Lam 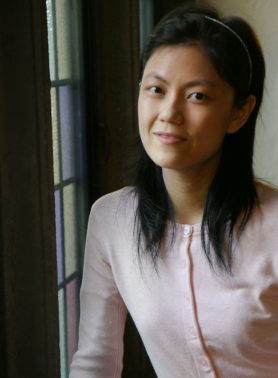 Commission: Oh Stars, from the Abyss: a Letter from Qiu Jin

Text: a letter from Qiu Jin, who was executed in 1907 at age 32 in an unsuccessful revolutionary revolt against the Qing imperial government

Lam received her Doctorate degree from the Peabody Conservatory of Johns Hopkins University, and is the recipient of a Henry and Lucy Moses full scholarship Artist Diploma from Yale University. She grew up in Hong Kong and Huntington Beach, and currently resides in New York.

To My Excellent Lucasia, on our Friendship - Ruth Huber 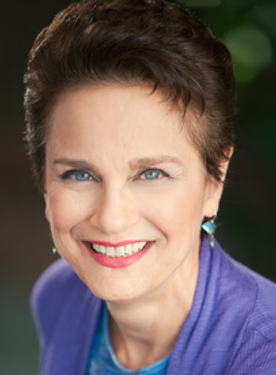 To My Excellent Lucasia, on our Friendship - premiered June 2, 2007

Commission: To My Excellent Lucasia, on our Friendship

Her compositions have won awards from The San Francisco Art Song Festival, the San Francisco Conservatory Choral Music Competition, the California branch of the American Choral Directors’ Association, the Austin Music Umbrella Songwriters’ Competition and the Kerrville Folk Festival. She has been instrumental in founding Tapestry (the Austin Women’s Chorus) and the Rainbow Women’s Chorus of San Jose, which she currently serves as Co-director and Composer-in-Residence. Her choral music is published by Yelton Rhodes Music, and she has received commissions from choral groups around the country. She has also composed music for solo and duo piano, clarinet, and instrumental ensembles. She lives in San Jose, California, where she teaches piano and co-directs the Rainbow Women’s Chorus.