Join us for our 25th anniversary season!

Season tickets for our 25th anniversary season are on sale now!

The Sisterhood of Cecilia, on November 19 and 20, 2022, celebrates the patron saint of music and her soul-sisters from long ago eras and distant lands. We’ll be joined by the Princeton University Chapel Choir and their conductor, Dr. Nicole Aldrich, on March 18 and 19, 2023 for Pass Over, Pass Through, featuring Andrea Clearfield’s Tse Go La (“At the Threshold of This Life”) based on texts and music from her studies in Tibet. We’ll close the season with one performance only of Look, Be, Leap! on June 4, 2023 with the premiere of our latest commission from Bay Area composer Ruth Huber. Season subscribers enjoy discounts of up to 33% off single ticket prices, exchange privileges, and, while supplies last, a 25th anniversary gift! Click now to order your subscription today!

The Sisterhood of Cecilia

November 22 is the Feast of St. Cecilia. She’s not just the patron saint of music—she was also a woman of strength and spirituality, and we’re singing music by and about Cecilia and her mighty soul-sisters from long-ago eras and distant lands, from Hildegard to Enheduanna to Sor Juana Inés de la Cruz to Mirabai. Love gorgeous music about the power of the feminine spirit? This program is made for you.

Our top priority is the health and safety of our performers, volunteers, patrons, and community. We have established these protocols and policies for our 2022 – 2023 season.

For the health and safety of our community, we require that our patrons be vaccinated, and we recommend that they be up to date with their vaccinations according to CDC guidelines. Masks will be optional, but are recommended when indoors. Please visit our COVID-19 Protocols and Policies page for details, and check back periodically for updates.

The Orange County Women’s Chorus is an ensemble of more than 50 singing women representing more than 20 communities in Orange County as well as Los Angeles, San Bernardino, and San Diego counties. Our repertoire spans many eras and cultures, and ranges from the serious to the silly, but our commitment to performing quality music at the highest level never changes. We’ve been “causing treble” in Orange County since 1997, and as we celebrate our 25th anniversary in 2022 – 2023, we are more excited than ever to bring our music to the community. The Orange County Women’s Chorus made our Carnegie Hall debut on June 27, 2022 with a spotlight performance followed by Franz Joseph Haydn’s Lord Nelson Mass under the baton of Artistic Director, Eliza Rubenstein. We were named an “Outstanding Arts Organization” by Arts Orange County in 2014, and were a prizewinner at the International Musical Eisteddfod in Llangollen, Wales in 2015.

Pass Over, Pass Through

The Princeton University Chapel Choir and their director, longtime friend-of-the-OCWC Dr. Nicole Aldrich, are traveling west to present one of the most fascinating works we’ve ever sung: American composer Andrea Clearfield’s Tse Go La (“At the Threshold of This Life”), based on texts and music from her studies in Tibet, and presented with an ensemble that combines western instruments and Tibetan percussion. You’ll be transfixed by the poetry and transported by the music. 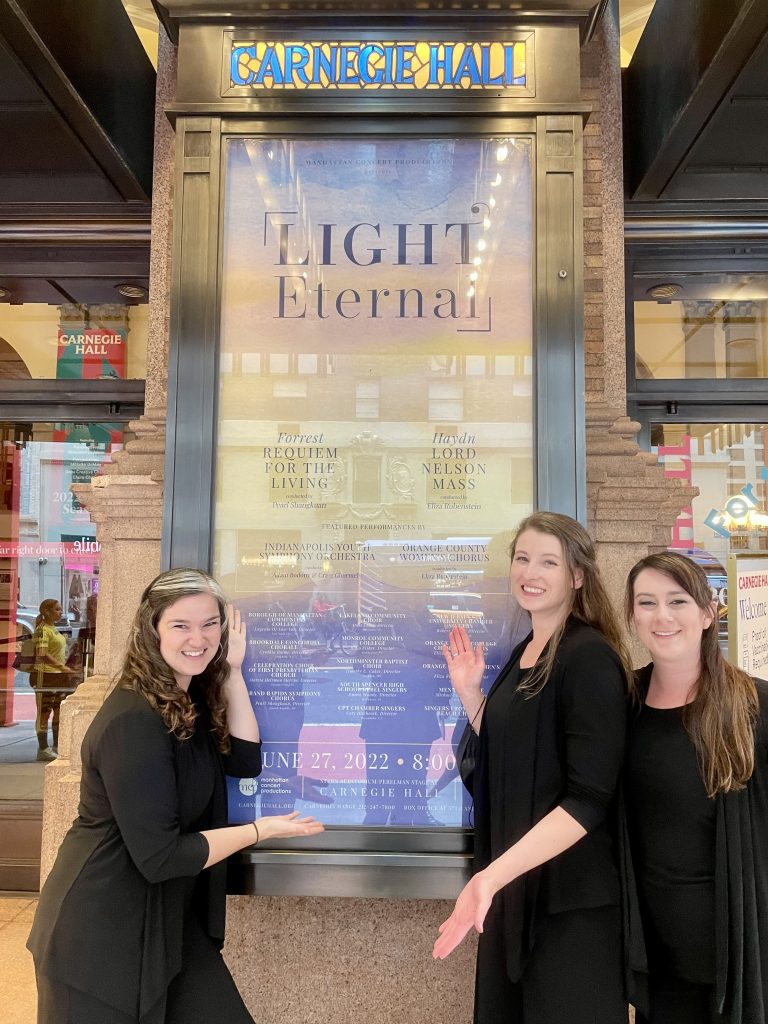 The Orange County Women’s Chorus made our Carnegie Hall debut on June 27, 2022 with a Spotlight Performance, followed by a massed choir performance of Haydn’s Lord Nelson Mass under the baton of Artistic Director Eliza Rubenstein.

Donate to the tour scholarship fund to assist singers with future travel today!

If you are contacting us about auditioning for the OCWC, please tell us what voice part you sing and include a brief description of your prior vocal/choral experience.

Did you attend a recent performance? If so, we'd love to hear what you thought! How did you hear about us? Do you have other feedback to share? Please send us an email by filling out the form below!